I left fairly early (9:00AM) for the trip back to Oswego.  While many of the group were still catching some "Zzzs", there were a few that were packing up.  Some photos of them here.

The trip home was interesting.  As anyone who reads this blog knows, I really don't like driving on interstates.  Since I prefer to crawl along at 57MPH tops, I feel like I'm standing still.  On top of that, interstates are boring!  So, when leaving Oswego I set the Garmin GPS to "avoid" highways (it doesn't have a "avoid interstate" setting).  As usual, it did strange things - it did avoid I81 (except to get across the St Lawrence River into Canada) and let me go up Route 3 (the Seaway Trail), but somehow doesn't consider Canada's 401 to be a highway.

Then again, it might.  I say that because it routed me on Canada's 401, which is an interstate (well, I guess technically an interprovience) almost all the way to the campground, but when I stopped at an ONroute (Canada's name for a Travel Plaza) for a bathroom break, without recalculating, Matilda (My GPS) changed the route, had me get off the 401 at the next exit & on to route 2, a much more enjoyable road that parallels it.

Even more interesting, on the way home it decided to stick with RT 2 almost all the way back with only a 10 K stint on the 401, after which, routed me through the city of Kingston.  Now, if it had any sense at all, why wouldn't it have used the 401 to route me around Kingston, a city with a population of 115,000 instead of through it? I will never understand GPS routing! It even routed me across Wolfe Island on a pair of ferries, something I haven't done since 2004, then without a trailer, rather than back across the Thousand Islands Bridge it used to get me to Canada 2 days earlier.

The ferries were interesting.  Onto the island is free, and a reasonably sized boat: 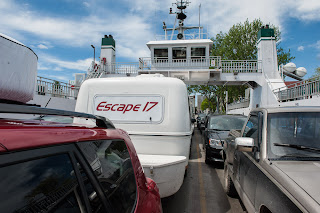 Between the island & the US, it is a private ferry that cost $20.00 & if my trailer was a foot longer, would not have fit, at least the way they had me park.  The front of the RAV4 hung off the port side of the departure ramp & the rear bumper of the trailer hung off the starboard ramp: 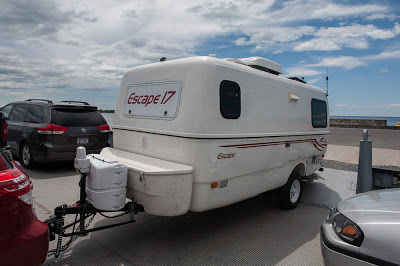 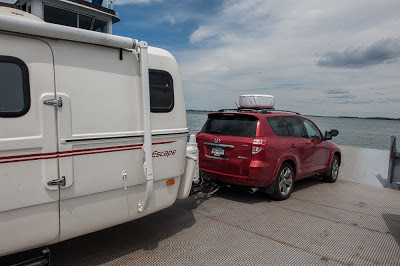 There wasn't enough room to take a picture of the full length of both the trailer & RAV4, but they sure filled the boat! The photo at the top of today's post shows the trailer & RAV4 taking up the entire width of the ferry.

After going through customs, I decided to drive out to Tibbetts Point Lighthouse in Cape Vincent. It is an interesting drive on County Rt 6.  The road keeps getting narrower and narrower, had "Dead End" signs every 1000' or so, and to top it off, an auction is going on that has cars parked on both sides.  While I did manage to weave through cars, If I had to back up through them, it wouldn't have been possible.  Eventually, I got to the end & found the lighthouse.  Even better, rather than having to do a "K" turn with the trailer, they had a loop through the parking lot to get me turned around.

The rest of the trip back to Oswego was a relaxing, non interstate drive.  So, I unpacked some of the trailer (since I'm heading for Nova Scotia in two weeks, I'm leaving as much as possible in the trailer), ordered out Chinese, and, after posting this last update, will hit the sack early!