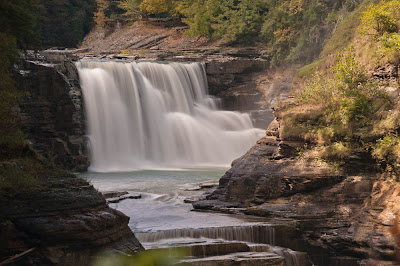 It rained of & on most of the night, but eventually cleared up around 9:00AM. I went for a walk, then made a bacon & eggs breakfast. After that the sun came out & I decided to shoot a couple of more photos of the lower falls under different lighting conditions from yesterday.

That's about it for this trip to Letchworth. I'm heading back to Oswego in the morning.  As usual, more photos at the Lakeshore Images page for today.
Posted by Jon Vermilye at 5:15 PM 2 comments: 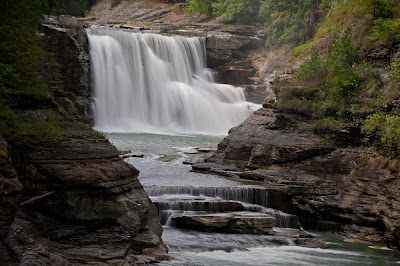 I woke up at 6:30AM, late, but plenty of time to get some early photos of the falls, however I had a splitting headache so I took a couple of aspirins & went back to sleep. I dragged myself out of bed at 9:00 & made a run to the Perry Market for some coffee. I'd have made it in the trailer, but I left my cup at the Escape rally in Niagara Falls, and even though it was a favorite, decided not to go back for it. I did pick up a mug for tomorrow.

After that it was back to the lower falls for some photos. It is/was a cloudy day, great for photos of the falls. Too much sun & the highlights on the water are so far beyond the surrounding rocks that without HDR techniques, which I'm not all that fond of, there is too much dynamic range for a good photo. There is a bit of the Fall colors although I'm probably about two weeks early for the full effect. Maybe I'll be able to stop back! As usual, there are more photos on my Lakeshore Images page for today.

After that it was on to the middle & upper falls. The upper falls has a railroad trestle just above it. Although very impressive (before it burned & was replaced with steel supports, it was the highest & longest wooden trestle in the US), it tends to get in the way of photos of the falls. I also took a few of the middle falls, located just behind the inn, and Wolf Creek.

After that it was back to the trailer to post these & spend some time relaxing.

Until Tomorrow! (That's a familiar ending that I hope to keep doing!)
Posted by Jon Vermilye at 3:41 PM No comments: 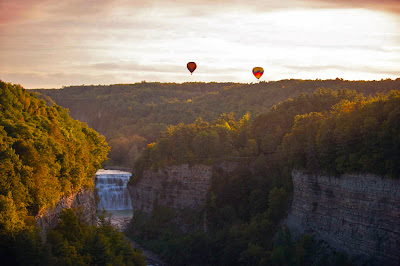 
I've been to Letchworth State Park a number of times - there are three major waterfalls to photograph & since waterfalls are a favorite subject of mine and my daughter Karin went to SUNY Geneseo, which is next door, they were all day trips.
Since I had some time after visiting the Niagara Wine Escape in Niagara Falls, I decided to book three days in the campground here at Letchworth. I'm in site 311, a 30 amp site without sewer or water. Although they take reservations, I generally don't make them. When I stopped at the campground office they gave a a list of 6-8 sites to check, said to pick one & come back to register. Most are quite shaded - since it is cooling off I chose the sunniest one.
Although it was too late in the afternoon to shoot good photos of the falls (the sun sets upstream of them) I did take a few.
They were setting up for a hot air balloon launch in the field next to the middle falls so I hung around long enough to shoot some images of the process. UnlikeSpeediefest, there were only two balloons, but it was fun watching them get off the ground. So, for those that have never watched a launch from start to finish (well, not finish for those in the balloon, just us on the ground) there are a bunch of photos at "A Couple of Days At Letchworth State Park."
Posted by Jon Vermilye at 9:27 PM No comments: 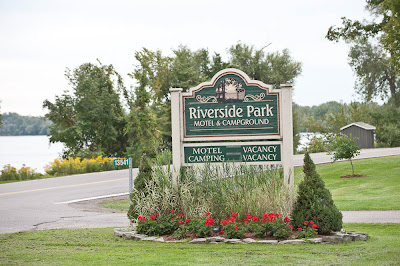 I'll add photos to the other site as the weekend continues.
Posted by Jon Vermilye at 10:29 AM No comments: