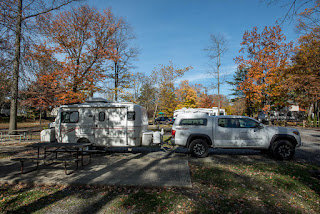 I managed to get out of the house by 8:30 & headed down I 81. I've made this run many times, and as long as it isn't raining hard & the trucks kicking up spray, I stick to the interstate rather than US 11 to make a bit more time. I want to get far enough south that I can keep water in the tanks & pipes as soon as possible.

The drive was through both NY & PA's fall colored hills; very pretty, and the traffic was good enough that you could take the time to look at them. I made a couple of fuel stops; so far I'm averaging 12.7MPG at 62MPH. I'm going to wait until I get out of hill country to determine what speed gives me the best combination of "getting there" and mileage.

I stopped for the afternoon at the Jonestown KOA in Jonestown, PA. I'm in site 45, a full hookup pull through level site (including cable TV) for $47.00. Like all KOA's, more than it should be, but it is a handy distance from Oswego. I bought some Halloween candy - I don't know if there will be any kids trick or treating in the campground since there are only a few RVs here, but it is all candy I like, so no loss!

No other photos - While the colors are nice, the view from I 81 isn't all that picturesque.

Dinner will be something ordered from the campground kitchen. I don't feel like grilling outside (it is 47°F outside at 3:00 & going down) and since they have food available, I'll take advantage.

It is getting to that time again. Actually, it is a bit past it; it was down to 31°F this morning. I'm staying in Oswego a bit later than last year because the official reopening of Waterman Theatre (the theatre I worked in for 32 years before retiring) is this weekend. It has been closed for two years while Tyler Hall gets a $20 million dollar overhaul. Since the theatre and building opened in 1968, it is about time!

Open houses, tours, and lots of former students & staff here for the celebration. I got a chance to visit with my mentor, John Mincher who is up from Florida for the reopening, and a couple of former students, including Denise Grillo, our sometimes baby sitter & currently doing production props for Hamilton & its tours. We had a great dinner at Alex on the Lake in Oswego.

I'm packing the trailer & truck, using a packing list I made after a couple of trips where I forgot important stuff. Of course I probably left something important off the list, but each time I use it it gets updated, so it can only get better. Since I spent most of the weekend at the theatre & visiting with old friends, I spent most of Sunday finishing packing. I am going to go without my Weight Distribution Hitch for this trip. I took the trailer out with both the truck & it fully packed and drove some bad roads to see how it felt. Not quite as "linked together" as it feels with the WDH, but it saves over 50 lbs of weight on the hitch & makes it much easier to hook up & unhook.

Starting mileage on the truck is 6887. Since the scales are not open at the transfer station, I don't have the final combined trailer & truck weights, but I did get a chance to weigh the truck fully packed last week & it is 20 lbs over what it was for the trip to New England - 5220 vs 5200 lbs. The combined weight is about the same - 8480 lbs, which puts the trailer at around 3260 lbs, a bit heavier than my usual 3010 lbs, but within the trailer's rating.

For those interested in more statistics, since April, 2001 as of the start of this trip I have spent 900 nights in the trailer & towed it 77,303 miles. Since I've ordered a 2017 21' Escape that is due to be picked up in October, 2017, I will be selling the 17B when I return to the east after this winter trip. I don't think I can get away with describing it as "hardly used!"

All packed & ready to go. As you can see in today's photo, the ash trees are done, but the maples along Lakeshore Road still have some color.

The plan is to slowly head to Texas. I'm spending a couple of days at Hungry Mother State Park in Virginia for a "Fiberglass Mini Rally", Nov 3-6. After that I plan to spend a bit of time in the Rio Grand Valley area, attend the Matagorda Madness Rally December 1 - 4th, then head to Big Bend, then on to Arizona & Quartzsite for the heart of winter. I'm also planning some side trips to southern California. Along the way and way back I'll hit a couple of Fiberglass Trailer Rallies, and hope to explore new places. I expect to return to Oswego towards the end of April.

Until next time -
Posted by Jon Vermilye at 5:26 PM No comments: