I just finished a few new modifications to the trailer.  They are at the bottom of my Trailer Modifications page. Other than that, not much going on.

I managed to catch my son's cold, so I'm taking it easy, hoping it will clear up before next weekend.

I did find something interesting when I checked the usage of my AT&T iPhone.  I have unlimited data, and, although they didn't charge me for it, over the last month it seems I'm making a "roaming web" connection 4-5 times a day.  Usually small amounts of data, although sometimes as much as a MB. Interesting, since I'm at home, in an AT&T covered area, and some of the connections are well past the time I went to bed.  Checked with the AT&T office here in Oswego, they said they haven't seen the problem, and not to worry about it.  I guess I shouldn't, but because I'm starting on a year long trip in two weeks, and AT&T has sent me messages complaining about "too much data roaming" more than once, I wish they had an explanation of why the roaming is showing up.

As to travel, I'm heading for Copake, NY for a fiberglass rally next Thursday. After that it is back to Oswego for a bunch of doctor visits, and then heading south & west for the winter.

The Rest of the Niagara Wine Escape

Since I put the entire weekend's information and photos on the same page linked in my previous post, there isn't all that much I can add here, other than to say I sure embarrassed myself taking a group photo with my iPhone & putting my finger over the lens (I won't show it here, but it is on the 2013 Niagara Wine Escape page).  That is what I get for using a "toy" camera!

I do have a couple of non rally photos - there are a bunch (well, I should call them a flock) of Cormorants that hang out in the trees along the Niagara River.  I added 4 photos at the 2013 Niagara Wine Escape page, but here is one of them: 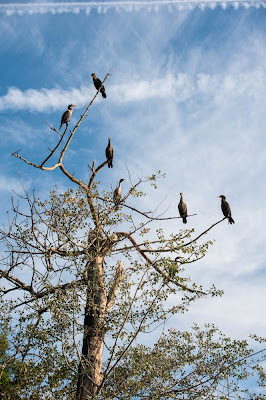 Kinda creepy looking, and, if you were there, creepy sounding!

Anyhow, I had a great time, met with some old friends & made some new ones, the perfect results of a fiberglass rally.  The trip home was uneventful - a total of 379.8 miles for the round trip.

Till next time!
Posted by Jon Vermilye at 7:40 PM No comments:

This is my 4th year attending the Niagara Wine Escape rally in Niagara Falls, Ontario.  A relatively short trip for me - about three and a half hours (less if I took the Thruway).  It always seems to start off cool and this year was no exception.  At 10#0 it is 52°F and expected to hit the low 40's by morning.

It is also a damp start - it either rained, sprinkled or at least "misted" most of the day.  We didn't have the traditional Friday night campfire, but a great substitute was an anniversary celebration for Denis Ferkany & Thelma Rimes, owners of a Bigfoot 5th wheel. Photos are on the 2013 Niagara Wine Escape page.  I'll add more photos both here and on the web page as the weekend goes on.

Until Tomorrow -
Posted by Jon Vermilye at 10:36 PM No comments:

The Rest of Nantucket

First, I must apologize for not updating these posts. It is now September, and I am just getting back to the page. Things got very busy at Nantucket, with friends & my daughter & grandkids arriving. It got even busier after returning to Oswego. No good excuse, so here is the rest of the trip:

Don & Anne arrived on the 15th. We did the usual visits to most of the different parts of the island including a trip to the dump (alright, transfer station & recycling center) and the Take It or Leave It where I stocked up on books.

Karin, Brian, Valerie & Zoe arrived on the 19th. My daughter & her family have been living in Gaborone, Botswana for the last two years, and will be there for another two. They are here in the states on a "home stay", a month back in the US. They are spending most of their time in Long Island with Brian's (her husband) parents, but also came to Nantucket and later, Oswego. It was great to see the grandkids - both the girls have grown so much since the last time I saw them.

On the 20th we all got together to distribute half of Carol's (my late wife) ashes in the Atlantic at Miacomet beach, the same place my mother's ashes were distributed as well as where mine will go when the time comes. The other half will go in Lake Ontario in Oswego. Both were favorite places for both of us.

We went back to the beach the next day - the girls had a great time playing in the ocean, Zoe for the first time. One minor blip - don't bury your daughter too close to the water. They were well away from any waves until, after burying Zoe, along came a "big one". She got a mouthful of salt water, but came away laughing. 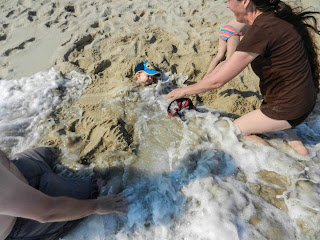 Eventually, everyone headed home, with me the last to leave, catching the 6:30AM "Eagle" ferry on Saturday, the 24th. By the way, never plan to leave Nantucket on a Saturday in August. I mentioned in the first post that traveling on a weekend was a bad idea - it was worst on Saturday. I eventually got off I 90, hoping the secondary roads would be less traveled. They were, but rather than just sticking to US 20, I followed my GPS. Bad idea - I set it to avoid highways & it routed me through Connecticut & Binghamton, NY to get to Oswego. Added 100 miles & two hours to the trip home, although the dead stop backups on I90 probably would have added at least an hour to the usual 6 hour trip.

Many more photographs at the Lakeshore Images page.

Once back in Oswego Karin & family flew up from Long Island & we distributed the rest of Carol's ashes in Lake Ontario.  The following day we went to the New York State Fair.  Valerie "caught" 3 sharks which she traded in for a pink elephant, got to feed carrots to a giraffe, and we all got to see my first place winning photograph of "House on Fire" in Mule Valley, Utah.  Unfortunately, all too soon they had to return to Long Island to get ready for the trip back to Botswana. More NY State Fair photos here. 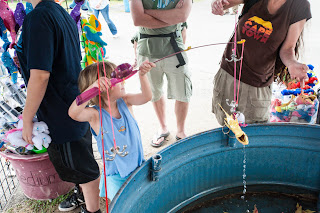 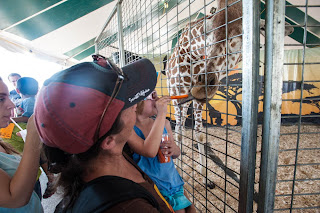 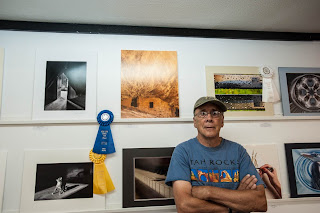 Recently, I've been making some changes, additions & modifications to the trailer and getting ready for a short weekend trip to Niagara Falls, Ontario for the Niagara Wine Escape 2013 Rally. Details & photos of the changes at the bottom of my Trailer Modification Page.

I'll add some posts from the rally.

Till then -
Posted by Jon Vermilye at 2:47 PM No comments: