Four Days in the Catskills

Don & Anne put together a 4 day trip to the Catskills for Don's sister Nancy & her husband Len, and I tagged along. The first day was around 204.5 miles, including a short stop at Don & Anne's to form a train. We had reservations for two nights at Mongaup Pond DEC Park, dry camping for $15.00 per night. While they have showers, they are at the park entrance; all we had near us was bathrooms with flush toilets.

We could have left from Oswego, since Don & Anne were already there for my "Thanksgiving in July" dinner, but the park was closer to Binghamton than Oswego.

In any case, the entire day (and that night) was spent in the rain. OK for us in the trailers, but a bit more of a problem for Nancy & Len in a tent. Still, they didn't get wet. We had a friendly duck that spent time wandering around the campsites. Dinner the first night was port tenderloin cooked in the rain, while we had Bubba Burgers the second night.

Len spent some time the second day after the rain stopped fishing on the lake.

The third & fourth nights were at Taconic State Park near the Massachusetts border. A 105.2 mile drive along many different secondary roads, many of which seemed to climb up & drop down each Catskill mountain. Don & Nancy's grandmother had one time owned a house that is still one of two that are privately owned within the park. We took a 3/4 mile trail from the NY parking lot to the tallest waterfall in Massachusetts; Bash Bish Falls. Uphill most of the way to the falls, which is nice because it is downhill on the way back! 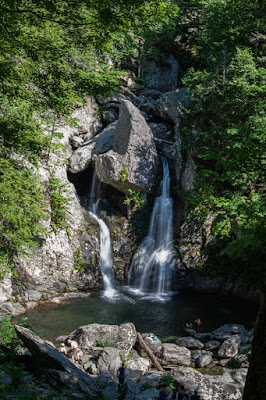 Much of the rest of the time was spent relaxing around the campsite, although Don & Nancy did a walk up the stream collecting iron works slag. Some very pretty rocks. Dinner the first night was spaghetti, meatballs & sausage, while tonight we will have chicken Alfredo.

A Pileated Woodpecker was banging around in a nearby tree & I took a couple of photos: 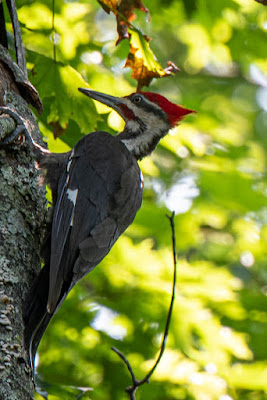 A good time had by all; only problem is it was too short.   More photos at the LakeshoreImages page for the trip.
Posted by Jon Vermilye at 1:57 PM No comments: