What Kind of Woodpecker is This?

I have a request from any "bird people". What is this?  It is a little smaller than a Hairy Woodpecker, and I've never seen one with red under the bill.  None of my bird books or my iBirds app show any woodpecker with red under the bill so I'm confused. The face striping is similar to a Pileated Woodpecker, but it is much smaller, and the tuff on the top of the head is not there.  Could it be a young Pileated?

It loves to sound on this metal mailbox bottom - you can hear it from 1/4 mile away.

Here is another view: 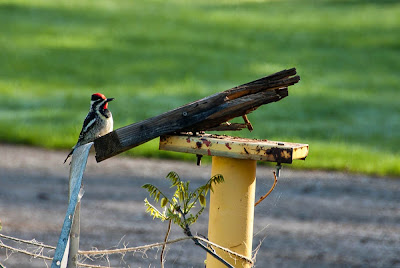 Any suggestions would be appreciated!

I did get an answer (in fact, a bunch of them).  It is a yellow bellied sapsucker.  Thanks to all...

A Change of Plans

I'm adding a photo of the new 100 watt solar panel.  The one in the rear is the original 95 watt GoPower panel installed as an option when I purchased the trailer.  The front panel is a 100 watt Poly panel purchased from Windy Nation.  I chose it to match the output voltage with the existing GoPower panel.  GoPower does offer a 95 watt add on panel that is an exact match, but their prices are out of this world.  The Expansion Kit, which includes a panel and wiring sells for around $500.00 plus shipping.  The 100 watt panel from Windy Nation with the cabling, connectors & branch connectors sold for $141.96 delivered to Oswego.

A change of plans for tomorrow.  I was suppose to take the trailer to Seven O's to have the refrigerator checked & replace the 120V switch in the water heater.  While I mentioned in the previous post that the refrigerator was now working on 120V, I discovered that once it reached the temperature set by the thermostat, it shuts off like it should, but as it warms up, it never starts cooling again until you wiggle the thermostat dial.  The problem - Seven O's service building had a fire last night, lost the roof & their tools, so I don't think it would be a good idea to haul the trailer to Cicero.

On the other hand, I made one last attempt with a pair of very thin needle nose players to retrieve the wired for the water heater switch, and managed to pull them out far enough so I could crimp on new connectors & attach the new switch.  So, I'll have hot water and, unless I run it on gas, a warm refrigerator!

Until next time -
Posted by Jon Vermilye at 7:20 PM No comments:

Not a lot going on.  I did get the solar panel mounted on the roof & cabled to the controller, so I now have 195 watts feeding the batteries.  Another good thing - the refrigerator is working on 120V AC.  Not sure why, but after switching it back & forth between gas & electric, it started working.  I have an appointment with Seven 0's to have the switch replaced in the water heater.  I tried, but I can't see how it can be replaced without pulling the heater.

This Saturday the Birds of Prey exhibit was part of the 2015 Onondaga Audubon Bird Festival.  Lots of exhibits, bird walks & talks, and, of course, a bunch of captive birds of prey.  Mostly owls.  More photos of the festival at LakeshoreImages.

Other than that, I'm slowly getting things together to leave on a trip to Alaska in June.  My friends Don & Anne are trying out their Scamp this weekend, hauling it to Albany to visit with the grandkids.