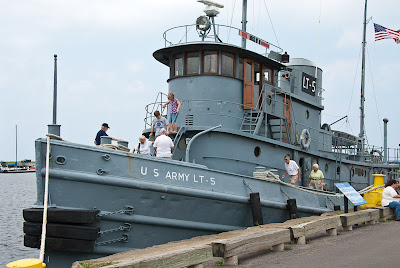 Today's Photo - The LT-5, at the H. Lee White Marine Museum. The LT-5 is one of the few remaining vessels that took part in the Normandy invasion.  It is still completely functional.


Not a lot going on with the trailer.  I've had a few conversations with Rease about the rear view camera & mounting the cell phone antennas & amplifier, but other than that it is under construction. I do have a couple of new photos.  They are sent by Escape Trailer Industries, and are small images, so the resolution isn't all that good, but it does let me know how the progress is going: 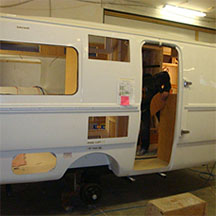 I'm sitting home with my cold coming back. I guess I can't complain since I don't get all that many, but getting one back a week or two after it finally goes away just doesn't seem fair! Meanwhile, I'm gargling & sniffing salt water (I know this is an old fashion technique, but both my doctor & I swear by it) and drink lots of liquids.

Spring is definitely here.  The Red Winged Blackbirds are at the bird feeders, along with Common Grackles.  I can see most of the lawn - the only snow left is where it slid off the roof or was piled when shoveling.

I have been playing with my air card in the WiFi Ranger, but until I take the entire system closer to a tower, I can't really get a good idea of how well it works.  The card uses Verizon's towers, and my house is in  Verizon's no man's land. If nothing else, I'll get a chance to try it out when I go to DC since the WiFi coverage at the Quality Inn has always been poor.

Well, enough drivial.  Till next time!
Posted by Jon Vermilye at 12:11 PM