The RAV is Wired! 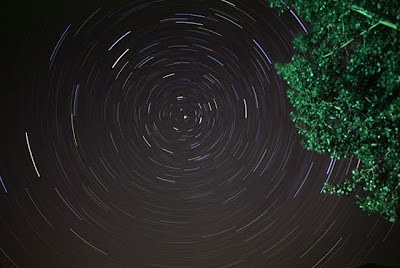 Today's Photo - A Star Circle - a 4 hour exposure (on film) with the camera pointed at the North Star.

I've been using a Wilson Sleek to boost the signal to my iPhone in the RAV4, but decided today was the day to actually install it.  Before installing, there were antenna wires, power cords, etc running all over the car, and the phone cradle sitting on the passenger seat.  Since I'm usually the only one in the vehicle, it doesn't really matter, but since I was also planning to change the XM Radio over to a portable unit so I could also use it in the trailer, I figured it was time to bury the wiring for both.

My roof is beginning to look like an antenna farm.  In any case, all the wiring  is stuffed into the weather striping, kick panels, and under the dash and the cradles for both are mounted on the dash.  Much easier than running the trailer lights & brake wiring.

I transfered the XM radio from the RAV4's receiver to the portable (a $15.00 transfer fee) & it actually worked!  In fact, both radios are currently working.  I assume the RAV4's will stop soon.  It will be interesting to see if the portable antenna works as well or better than the one built into the RAV.  When using the built in, almost any hill blanks out the radio.  It can't be any worse!

Till next time!
Posted by Jon Vermilye at 4:26 PM