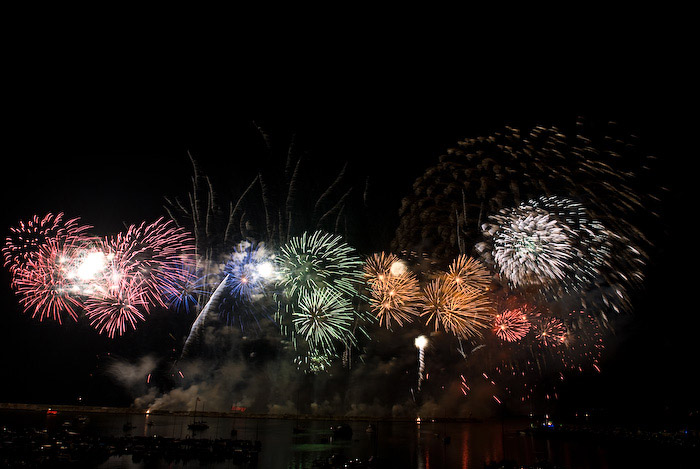 Oswego has had a summer festival called Harborfest for many years - my oldest tee shirt is dated 1990. On the Saturday of the festival one of the local nuclear plant owners (Entergy) sponsors a 23 minute "Fireworks by Grucci" show.  Photos from some of the festivals & fireworks start in 2006 here.

I picked up an inexpensive XM Radio receiver yesterday.  I have an XM receiver built into my RAV4, but I want to be able to listen in both the RAV & my trailer.  According to their web page, I should be able to transfer my subscription from the RAV's radio to the portable version, purchase an extra antenna for the trailer, and be able to move it between the two.  It would be nice if they would let me use the same account for both radios, but they don't. From what I've read and from personal experience, nothing goes right when dealing with XM Radio's customer service, but I'm up for a challenge!

My cold has just about run its course; I feel like I'll live.  We are currently being nailed by a heavy, wet snow that has dumped 6" so far & it is still coming down.  I do think we have had enough winter and I'm looking forward to spring.
Posted by Jon Vermilye at 2:35 PM No comments: 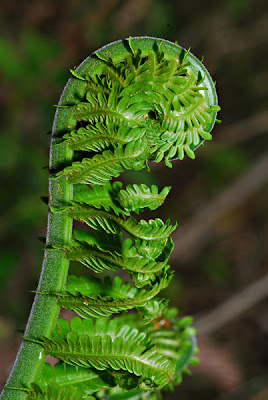 
Well, our electricity came back on around noon on the 19th.  Not as bad as during an ice storm a few years ago.  Ice storms are rare in Oswego - trees were falling left & right; we had one do $2,000.00 worth of damage to the house, and power was out for almost a week.  For the first two days it was impossible to drive more than 1/4" mile from the house - downed trees blocked the road in both directions. So, things could have been much worse!

Now I'm getting a cold.  I don't get very many - usually one every couple of years, so I shouldn't complain, but still, I could do without it!

Well enough rambling.  I can't wait until I head west to pick up the trailer.  I'm sure this is just about as boring to read as it is to type! 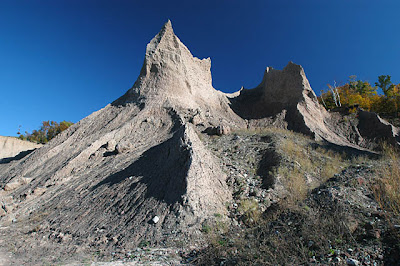 
Although not a destination state park (no campground, etc) Chimney Bluffs is interesting because of the structures the wind & waves have left along the shoreline of Lake Ontario.  An interesting stop along the Seaway Trail.


We put in a 15 Kilowatt stand by generator a couple of years ago - My wife was on an oxygen concentrator for the last couple of years of her life, and National Grid was/is not the most reliable utility in the country.  According to their outage map, the power will be back on at 8:15AM! A recheck of the map now says 11:30AM.


It is larger than I actually needed - the supplier made me a deal I couldn't refuse on going to a whole house system rather than the typical installation where only a couple of circuits are on the generator.  It runs on natural gas, so there isn't the problem I had with stale gas in my previous generator. 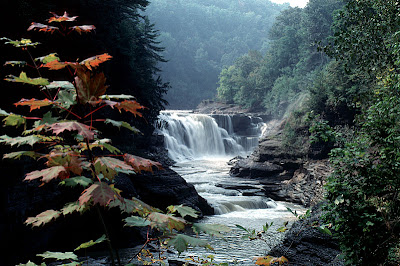 
This is a Kodachrome of the lower falls taken in 1994. I went back in July, 2009 with a digital camera. Letchworth is a beautiful park with three large waterfalls, 66 miles of hiking trails, 82 cabins & 258 campsites, some with 50 amp services.

This week I sent Reace at Escape Trailer Industries the parts for the cell phone system.  They are going to mount an external antenna on the rear driver's side of the trailer, and run it to an amplifier inside. The inside amplifier is connected to a ice cream sandwich sized antenna that produces an amplified signal 2'-4' around its location.  It will cover the front table area & the front cabinets where the cell data transceiver will be located.  It should improve both cell phone & data connections.  Since I plan to update both my blog & my Lakeshore Images web pages while on the road, and plan to often be on the edge of cell coverage, I hope the system will help.

I also sent the back up camera & cabling.  Although it is not absolutely necessary, while traveling alone having an extra "eye" will be handy while driving & parking the trailer.

I did run into an interesting problem - Canadian customs is going to charge duty to import the stuff.  You would think there would be some kind of exemption since I bought the parts to install in my own trailer, but according to my phone call to customs, the duty must be paid!
Posted by Jon Vermilye at 6:37 PM 4 comments: 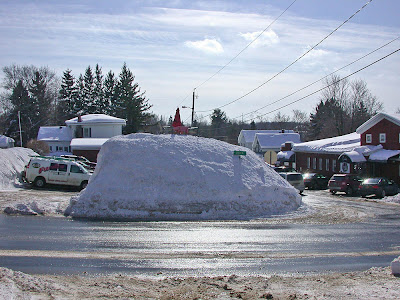 Just a short post, but I had to show this photo of a local restaurant.  Be sure to click on the image to see the large view.

Oswego has had 170" of snow so far this winter & they have to put it somewhere.  This pile is a combination of snow from the street & the parking lot.

Canale's usually has outside seating during the warmer months. As a joke they set up one of their summer tables, complete with chairs & an umbrella on top of the snow pile.  The owner doesn't really plan to seat anyone out there, although in an interview with the local paper he said that if he gets any more reservations for Valentine's Day, it is about all the seating left!  One note -  to give a better idea of the size of the pile, that green thing on the upper right is the corner street sign!
Posted by Jon Vermilye at 6:28 PM No comments: 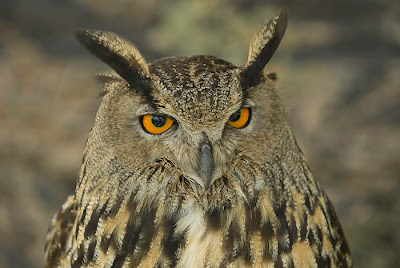 I've been using Pandora as an internet radio for awhile, but finally decided to pay the $36.00 per year to avoid having it shut down every 45 minutes, get rid of the ads, etc.  I like the product.  On my laptop I can use a high bit rate version, but most of the time I use it with my iPhone, either plugged into the auxiliary  input of my RAV4 radio or connected to my Sony RDP-XF100IP Portable radio/dock.


In either case it works out well since my favorite style of background music is "Ambient Radio" which is difficult to find on traditional AM or FM stations.  Since I'm not all that familiar with the individual artists by name, Pandora is the perfect way to listen to a genre without knowing titles or performers. And, if I do discover an individual performer I like, entering that performer will result in discovering similar artists.


About the only other radio I listen to is NPR, which is often available over the air.  If not, or while traveling, if I want to listen to WRVO, my local NPR station, I can use the Public Radio App on the iPhone or log on to the station over the internet.


Actually, although those are my favorites, my taste in music is pretty eclectic. As a former sound designer for well over 100 theatre productions, I've been exposed to just about any kind of music that has ever existed, and the ipod portion of my phone sounds like it.  At least I haven't transferred the sound effects form my itunes to the phone!  No rain, thunder or big trucks!


Till next time.
Posted by Jon Vermilye at 11:43 AM No comments: 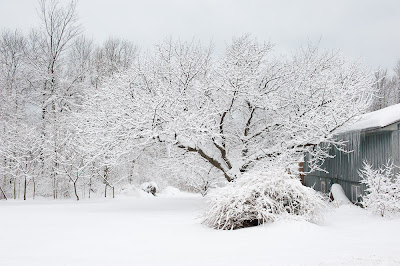 Last night's snow was unusual for Oswego - it was heavy, sticky snow that produced a typical winter wonderland.  Most of our snow is lightweight lake effect that blows off the trees in the slightest wind.  This morning everything was still covered.  Of course it is beautiful, but you don't want to shovel it!  Time for the snow blowers. 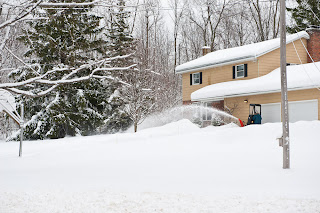 My neighbor was out clearing the driveway - I had just finished mine: 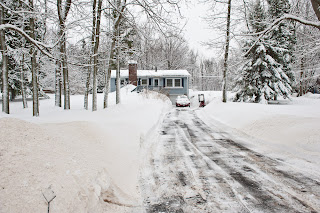 The snow at the end of the driveway where it hits the road is piled high enough that shoveling is out anyway - throwing shovelfuls of heavy snow over your head is not much fun hence the snow blower.
I took my camera for my walk & took these photos.  Here is one more. 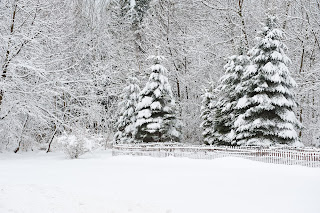 After that it is back to a warm house, throw another log on the fire, and a big Sunday morning breakfast.
I'm still playing with the WiFi Ranger router.  So far, no problems other than wondering why it was running very slow one morning.  Turns out my regular router was disconnected & it chose another open WiFi connection in my neighborhood.  No idea as to whose, but restarting mine cleared things up. I'll give a full report once I add my cell card to the router.
Till next time!
Posted by Jon Vermilye at 2:35 PM 3 comments:

Eagles at the Mall 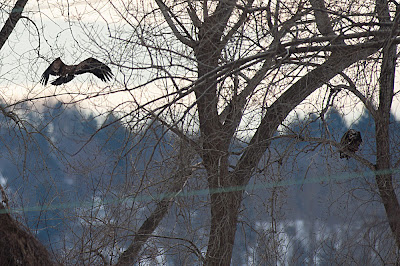 
Although I'm not at all proud of the quality of the images in today's post, it is interesting in that there are not too many places that you can take photographs of eagles from a shopping mall's parking lot!

Onondaga Lake on the north side of Syracuse was once one of the most polluted lakes in the country.  Although it is still far from pure, it has been improved to the point where fish & eagles have moved in. This winter most of the lake is frozen over, however the Metropolitan Syracuse Wastewater Treatment Plant discharges into the lake, forming a small section of open water where the eagles can catch fish.  Between 15 & 22 of the normally solitary birds can be seen perched in & flying over the trees that line the shore of the lake.

A lucky photographer from the local newspaper, the Post Standard, was given the opportunity to enter a restricted area near the plant to capture some close up images.  Here is a link to the article in the paper.

Here are a couple more: 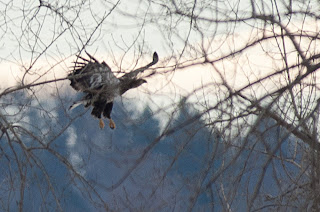 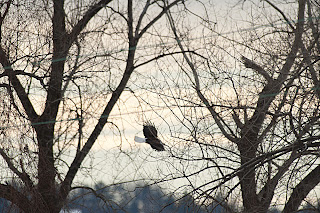 Till next time!
Posted by Jon Vermilye at 5:13 PM 1 comment: 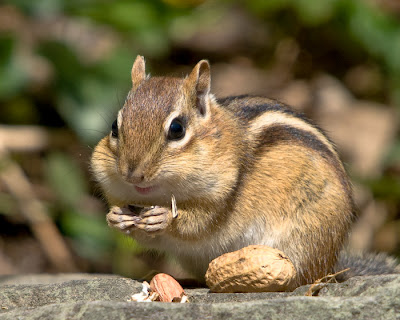 I think I'll skip swimming today.  Got enough exercise shoveling the roof!  We are expecting 12" - 18" of snow tonight & tomorrow, and there is already 30" or so on most of the roof.  Building a ranch style house in the snow belt doesn't make much sense, but it was something we didn't think about when be bought it in the 70's.

I'm fairly sure the weight isn't a problem until we get 4' or so, but even with good insulation & venting, icicles built up on the gutters, and I'm afraid the weight will tear them off the house.  Actually, the ventilation is only good when enough snow melts off the ridge vent - that usually takes a couple of days after a heavy snow unless I get up there & dig it out.  I have to get up on the roof at least once a month anyway, just to clean the chimney - I do 90% of my winter heating with firewood.

When it gets real bad (or I'm just tired of shoveling), I use a small electric snowblower to clear the roof.  It isn't everywhere you see people snow blowing their roofs!
Posted by Jon Vermilye at 1:41 PM No comments: