We sat around much of the morning.  I had a visitor that wanted to see the Escape 21.  They are either going to order one or wait to see what the new Escape 23 looks like.  We toured & talked for awhile, then had some lunch.

After lunch we went for a walk on the trail around Green Lake with a short offshoot to see Round Lake. 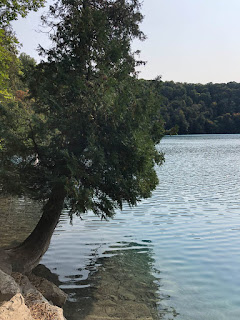 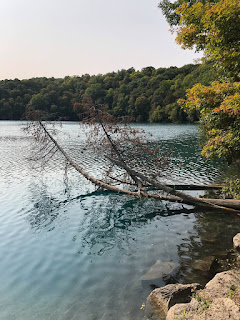 While the photos don't show it, Round Lake is just as Green as Green Lake.   A nice 2.5 mile walk.
Back at the trailer we sat around doing so more reading.  I'm reading The Off-Islander, by Peter Colt.  A book about a Boston detective working, at least in part, on Nantucket Island.  I couldn't pass up the book since I love the island, but so far the book is not all that impressive.
Dinner was a chicken & shells dish that Anne made.

Posted by Jon Vermilye at 8:37 PM No comments:

I went for a morning walk down to the lake - it really is green, not from algae, but because of minerals.  It is also a Meromictic lake, which describes a lake that the surface water does not mix with the water in the lower levels.  This is what makes it a very clear lake & gives it its green color.   Some photos from an afternoon visit: 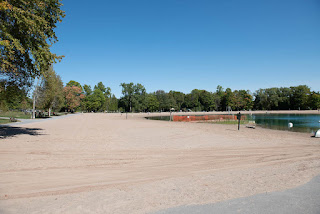 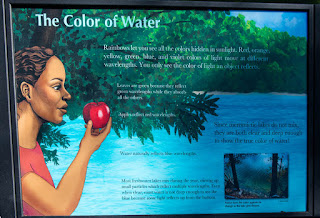 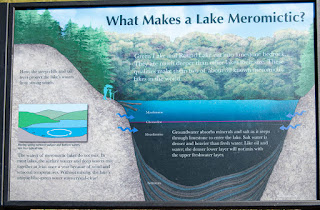 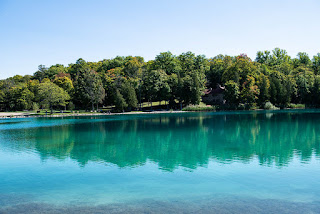 The beach is closed, but there was lots of people out walking around the lake.  I've never been here, but it looks like a popular beach during the summer.

We also made a stop at Chittenango Falls, one of my favorite waterfalls.  The least amount of water going over the falls that I've ever seen, and too much direct sunlight for good photos, but here are a couple: 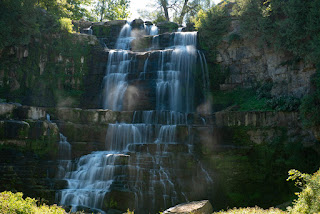 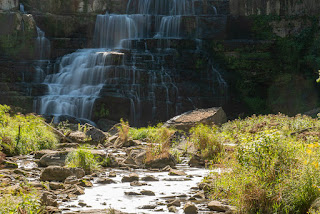 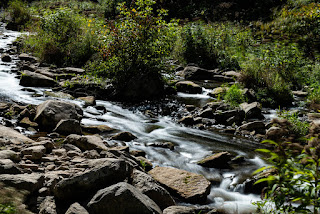 Back at the campground we had Impossible Burgers & corn on the cob for lunch.  I have to say I like the Impossible Burger a bit better than the Beyond Burger, although both are an interesting alternative to beef.

We spent the afternoon sitting around reading.  My current book is a series of books about a character named John Milton by Mark Dawson, a British author that publishes on line.  The character is similar to Reacher in Lee Child's books.  Not quite as well written, but well worth reading if you like the genre.  Latest was #6 in the series - Salvation Row.

Posted by Jon Vermilye at 9:21 PM No comments:

I arrived at 3:30, no problems registering early, and I'm in site 45.  Almost level side to side & needing quite a bit of lift to the front to level front to back. 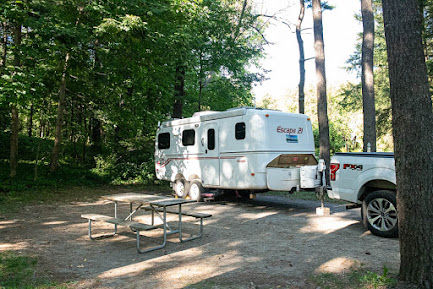 Don & Anne started out with a bit of a problem - the rear door on their Toyota Sienna wouldn't open.  Since they need to open it to run the 7 pin cable for the trailer, a problem.  After trying all kinds of things, Don climbed over the rear seat, removed the door panel, and used the manual latch to open it.  The door sound beeps, but the motor doesn't run.
Anyhow, they got here a little after 4:00 and set up in site 46.  I took their photo while they were setting up: 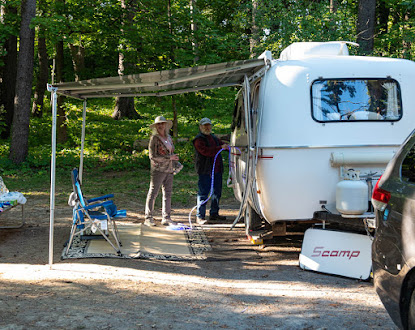 I started a blueberry pie, discovered that I no longer have an oven thermometer, so I'm going by the dial temperature on the Dometic oven - a bad idea...

They have a dish washing station at the bathrooms that are about 4 sites away from my site, so I washed out the blueberry mixing bowl there rather than turning my gray tank purple.  That also saves dealing with a stinking gray tank - for some reason, washing either the mixing bowl or the pie pan causes a real stink in the tank after a couple of days.  Since this trip is only for 3 days, I guess that won't be a problem, but I used the park's wash station anyway.

Dinner was beef Bubba Burgers, a salad, pickled beets, and peaches.  The pie is still too warm so it will have to wait until tomorrow's dessert.

Posted by Jon Vermilye at 6:54 PM No comments:

Well, again it has been awhile, but not much happening.  I am finally going to get the trailer out for a couple of days.  Heading to Green Lake State Park near Syracuse for a couple of days.  Weekends are still booked solid, but during the week a few sites are available.  While it is only 45 minutes from home, I've never been there.  I have driven by many times on my way to a favorite non camping state park - Chittenango Falls.

I'll be meeting Don & Anne Guido at the park, hopefully around 3:00.  The "official" availability time for sites in the New York state park system seems to now be 5:00PM.  Kind of late, since you are paying for a night without much of a day.  We are hoping that they will let us in a bit early.

The trailer is packed & hooked up so I'll be hading out in a few minutes.

Posted by Jon Vermilye at 1:42 PM No comments:

Two Posts in One Day!

I know I haven't been posting since arriving home in April, but I have been picking close to a gallon of blueberries every other day for the last two weeks.  There are still plenty on the bushes, so I did some experimenting with something other than blueberry pies.

This is a Blueberry Cream Cheese Coffee Cake.  Too many pots & pans to make on the road, but not all that difficult at home where cleaning up is easy.  It passes the taste test! 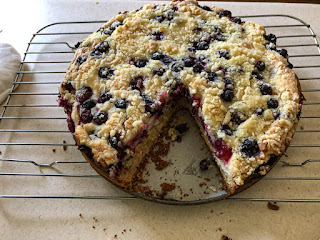 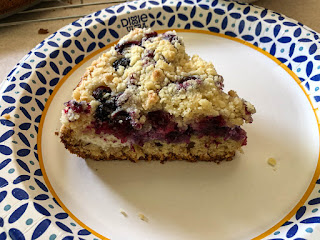 Posted by Jon Vermilye at 3:29 PM No comments: