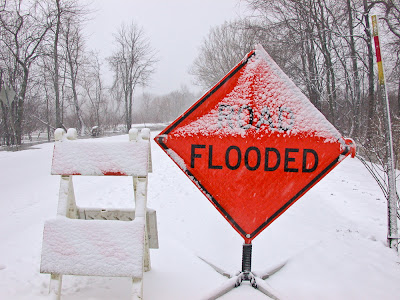 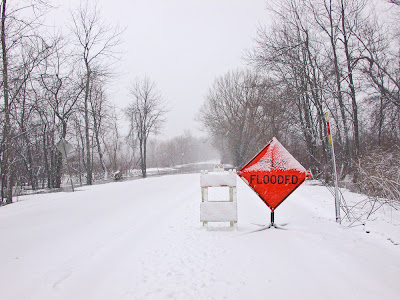 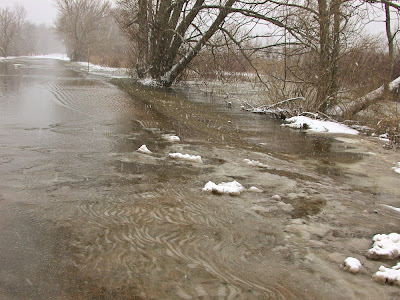 As far as I'm concerned, the official first day of spring in Oswego is opening day at Rudy's, a lakeside fish stand. Unfortunately, that is still a few weeks off. Still, there is another that has been making its mark, at least in our neighborhood, the flooding of Lakeshore Road.

Lakeshore Road was originally called Snake Swamp Road (a much more interesting name to my mind and one I fought to keep) but  was changed to Lakeshore Road as expensive houses were built on the lake side of the road & the owners just couldn't live with the name.  In any case, there is still a swamp about 1/4 mile from my house.

Although it rarely flooded in the past, the town raised the height of the road over a foot, and also added additional 3' diameter drains under the road as new construction upstream increased the flow of water through the swamp.  Flooding has become at least an annual problem ever since a family of beavers moved in.

Like all beavers, they all hate the sound or running water, at least downstream of their lodge, and each night they cut down branches, trees & block the drains.  The next morning the town crew comes out with a truck & hauls away the branches & logs blocking the drain.  Each "crew" repeats their "job" every day! During the winter they both call a truce since neither likes working in the cold. With the combination of spring snow melt & the awakening of the beavers, the whole process starts again. A few years ago a shotgun would solve the problem, however that is frowned upon these days.