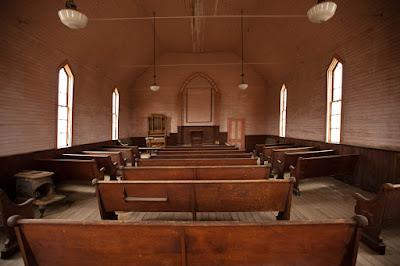 Today's Photo - The Inside of the Methodist Church, Bodie State Historical Park, CA

As Yogi Berra would say "It's deja vu all over again". Both Don & Anne wanted to see Mono Lake & Bodie Ghost Town, and they both fit into our schedule so there we went.

We were a bit too early to register for the campsites at Mono Vista so we headed to the South Shore Tufa site with the trailer attached.  They accepted both my Senior Pass & Don's Annual Pass for admission.  They actually had a park ranger at the entrance.  The sky was overcast, which gave everything a different look.  I liked the blue sky against the formations, but you get what you get.

After that we dropped the trailer at the campground (Site 41) and all got in the RAV4 & headed for Bodie. Much nicer this time - we could drive to the normal parking lot rather than walk a mile & a half like my May 8th visit.  Most of the snow has melted, and it was a lot more crowded, both with visitors, volunteers, and rangers.  There were also many more open buildings, including the museum and the inside of the Methodist Church. Took a bunch of photos that will appear on both the Bodie Page & today's Lakeshore Images post.

After that it was back to the campground (in the rain) & a spaghetti & sausage dinner.  Since it is raining, and likely to get pretty cold (it went down to 12°F last night at Bodie, although it is 1000' higher than we are here) we decided to try all of us in the trailer.  We will start putting it together after I post this & the Lakeshore Images page.

Till tomorrow -
Posted by Jon Vermilye at 10:22 PM