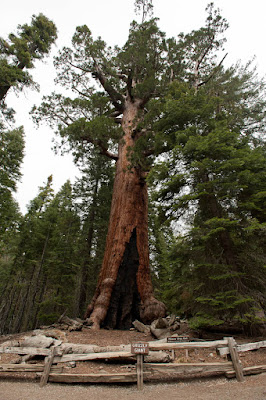 Another cold morning with breakfast in the trailer. Good thing there is heat in the bathrooms - a shower wasn't too bad. After breakfast it was back to Yosemite. Lots of fog - we were worried that we wouldn't be able to see the tops of the Sequoias at Mariposa Grove, but by the time we got there it wasn't foggy, just cold. We saw a sign stating that the parking lot at Mariposa Grove was full & we should park at the Wawona Information Center & take the shuttle. Only problem, no parking spaces at Wawona. So, we kept going. Carol must have been looking over us (she always found a parking place)  - as we reached the south entrance a single parking space appeared so we only had a 2 mile bus ride to the trees.

As long as the sun was out it felt warm, but when it went away it felt pretty cold. On top of that it started to sleet on the hike to see the Grizzly Giant. One of the photos on the Lakeshore Images page that looks like sand is actually sleet on the ground. We did most of the trees in the lower section, but skipped the 6 mile hike to the upper section.

After that rather than driving back the way we came we drove to Mariposa (the town) so I could show Don & Anne the drive into the park on CA 140. I think this is the nicest entrance road to the park, traveling along the many cascades of the Merced River.

We arrived back at the campground around 6:30, made hamburgers, green beans & pasta for dinner & called it a night. We will figure out what we are going to do tomorrow tomorrow!

Till Tomorrow -
Posted by Jon Vermilye at 11:58 PM