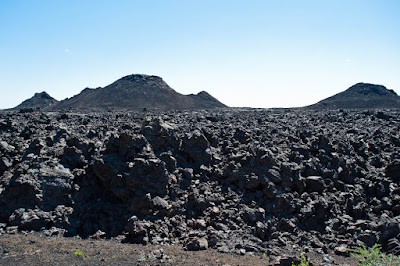 Today's Photo A Lava Field at the Craters of the Moon National Monument, ID


I set up the camera to take a series of 15 second exposures starting at midnight. I checked them out a little after 12:30 & I didn't get quite what I wanted, but here is one of them. I'll try some more tonight as well as shooting a star trail, a long exposure that makes circles out of the stars because of the earth's rotation.

Today's plan was to drive through Arco and visit the EBR-1, the world's first power plant that produced usable electricity. After that I'd return to Arco, do laundry, get a haircut, and pick up something for dinner.

I figured I should check out the EBR-1 since I live in a town (Oswego, NY) that has three nuclear power plants as well as a large (over 2 Gigawatt) formally coal, switched to oil, then switched to natural gas power plant - which, for some reason only runs a few hours per year when the temperature is under -10°F, as well as a couple of hydro plants on the Oswego section of the Erie Canal.

The EBR-1 started producing electricity in 1951, and powered the town of Arco, the first city to have "Atomic" power. I've toured one of out local "Nuke" plants (long before 911 - you can't get near them now) and it is interesting to see the similarities & differences. I added a group of photos at today's Lakeshore Images Journal Page. I love the image of the turbine & generator with the names of the persons at the plant when it was first started.

Outside the EBR-1 building are two huge nuclear aircraft engine prototypes. I never knew it, but in the mid 1950's there was a plan to build a nuclear powered bomber that was capable of staying in the air for over a week. For a number of reasons it was never built, but the prototype engines were built & tested.


Although not the most important National Historic Landmark of the trip, it is definitely worth a stop if you are heading towards Craters.

As to doing laundry, well, the only laundromat in Arco (or within miles) is closed. I had to go to Moore, about 7 miles north of Arco to find a place that takes drop in haircuts, but had a good time talking with the barber - the first time a man has cut my hair since I was in high school.

Till next time -
Posted by Jon Vermilye at 6:15 PM