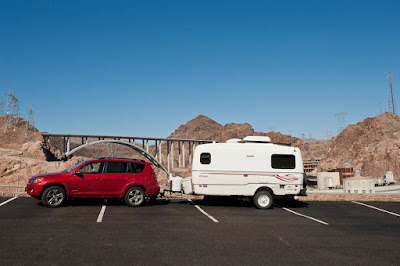 
I had to use this photo for the blog today so Don & Anne can see what they are heading for.  The new bridge is far more interesting from below or the side than when you drive over it. If everything goes as planned, they will join me at the Valley of Fire State Park next week.

I do have to put in a good word for the Blake Ranch RV Park & Horse Hotel.  Not only did it have the best bathroom/shower rooms of the trip (or any of my trips) but it is an all around great place to stay for a night or two.  I can't say as much for the restaurant nearby.  It is an Iron Skillet and makes about the worst pasta sauce I've ever had.

I got an early start, leaving the park around 7:00AM since I wasn't sure how crowded the Valley of Fire State Park campground would be & I wanted to get one of their few electric sites.  I did stop long enough to see Bolder Dam.  If you want to actually drive across it (or for that matter, any where near it) you have to have your trailer checked out.  The inspection crew loved the trailer!

On the way out of the dam a group of runners got ahead of us.  It is all uphill & driving behind a group of what looked to be inexperienced runners was pretty slow. To top it off, one of the tour busses decided to go around cars that were lined up behind the runners.  Every time there was a turn lane he would move into it, pass as many cars as possible, and cut back in when the lane ended.  I tried to fight him, but I suspect I cared more about my trailer than he did about his bus.  Plus, he is just a little bigger!  He did get his just rewards.  One of the police women saw what he was doing, pulled around him, got out & stood in front of his bus until all of us went by.  A great feeling!

After that it was a nice drive along Lake Mead to the park.  I didn't get there until a little after 10:00AM - there was a time change or a daylight savings time change or something.  There were about 3 electric sites still open.  None were near a non-electric; I was hoping to be able to get a site for Don & Anne.  I talked to the park rangers & they said there was no problem changing sites, so hopefully one of the ones near the tent sites will open up early next week.

It is fairly hot, at least compared to the Grand Canyon.  This morning I went to the showers at Kingman it was 47°F, it is now 79°F.  I didn't start the AC - I'm trying the fan to see how it works.  So far the inside of the trailer is 81F so that's not too bad.  I think I'm going to turn the trailer around later today or tomorrow. Right now the fridge is aimed into the setting sun, making it difficult to keep it's cool. Plus, the awning will make better afternoon shade if it is on the north side.

I'll shoot some photos of the park this evening. Lots of red rock around the campsite & throughout the park.

There won't be any Lakeshore Images postings, at least from the campground.  I have a good Verizon signal, but it is 1XRTT with a transmit rate averaging 5kb.

Till tomorrow!
Posted by Jon Vermilye at 5:53 PM