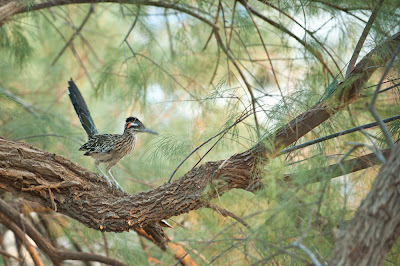 It was a windy night. For the first time it didn't cool off after sunset. It was still 77°F at 10:00PM. Around 11:00 the wind started to pick up. It was a bit windy earlier & the ground under Don & Anne's tent was so hard that they couldn't drive tent stakes, so they tied the tent to the stabilizing legs of the trailer. On the far side of the tent we stuck the equalizer hitch in the tent stake loop. As the wind picked up, the entire trailer was shaking & I could hear the tent flapping. I thought about asking Don & Anne into the trailer, but their weight was the only thing holding the tent down. The wind was strong enough that it moved the hitch (about 60 lbs) more than a foot. None of us got much sleep. It never let up completely, but enough that we could pack up in the morning.

Originally we planed to stop at Kernville, CA for the night, but by the time we hit Death Valley we decided to call it quits. We are in site 113 for the night. A bit of shade, which is good, because the temperature today is going to hit 107°F and only go down to the high 70's tonight! Quite a bit different from May 9th, the last time I was here.


A little before dark a Roadrunner "ran" through the campsites. It was pretty funny with about 10 people with cameras chasing it trying to get a photo. Of course, one of them was me!

This won't get posted until we have a better connection. Nothing on Verizon & only voice on AT&T.

Till Tomorrow...
Posted by Jon Vermilye at 3:59 PM