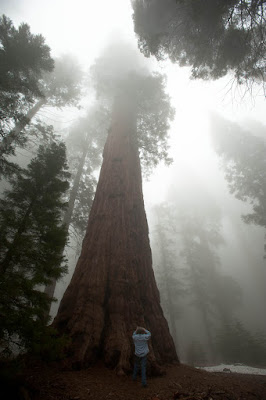 
Today it was off to see Kings Canyon National Park & Sequoia National Park. The GPS routed us on CA 155, which was a bit much for both my & Don's stomach. Almost continous curves & switchbacks. Plus we quickly got into fog so thick we could barely see the road let alone the view at the sides. It cleared as we drove out of the hills, but as we drove up into Sequoia National Park, the fog came back. We stopped at some tall trees and took some foggy photos, and I suppose I could try to tell you one of them was General Sherman, the tallest tree in the world, but I'd be lying. We did stop at the General Sherman parking lot, but the fog was so thick that a ranger was there to let us know that if we did the 1/2 mile walk to the tree we would be able to see the first 15' of it. So, we continued on. Since it was getting late & we had a long drive back to the campground, we didn't do the entire drive to Kings Canyon, but left the park at the CA 180 exit & took CA 63, CA 99, and CA 178 back to the campground, reaching Lake Isabella around 7:00. The drive along the Kern River between Bakersfield & Lake Isabella was beautiful.

Rather than making a meal in the dark we decided to eat out & had Barbecue in nearby Kernville, CA.

Until Tomorrow -
Posted by Jon Vermilye at 12:55 AM