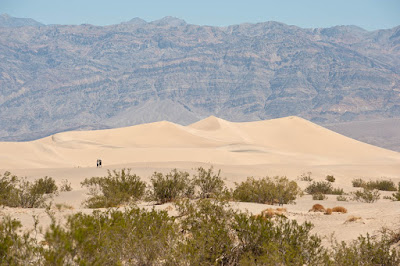 Well, we certainly had an interesting day today. It started ordinary enough with a drive on US 190 through Death Valley National Park. The RAV4 did OK pulling the trailer up the 9 mile 8% grade, while not overheating it did smell a bit hot near the top. After that we stopped so Don could take some photos of the sand dunes. Because there was less wind than the last time I was there I managed to get a clear photo myself.

Once outside the park I found a gas station with a good Verizon connection so I uploaded yesterday's pages.

Then it was on to Kernville. The plan was to stop at one of the campgrounds there. Minor problem - the area was on fire. We were wondering why it was so foggy until we were close enough to smell the smoke. The road was closed, but another way into Kernville was opening as we pulled up. I ended up turning the trailer around (twice) on a narrow two lane road.  "K" turns with a trailer are interesting!

Although we didn't see it, we were told the KOA in the area burned down & the one we were planning to stay in was full of the people who left the KOA. We checked out a place called Camp 9 on Lake Isabella, but the wind was strong enough to knock us around & we didn't want to go through another night like the last one at Valley of Fire! We pulled into Tillie Creek Campground, and even thought the sign at the gate said no sites available, the campground host started to give us directions to another national Forest Campground that still had some open sites. As she was doing this, someone came up & said site 75 was empty. Although a bit steep, it was big enough for both the tent & trailer, so in we went. We are here for at least two nights - it is Memorial Day Weekend & most of the area campgrounds are full. We will decide Sunday if we want to move on or stay another night.

Till Tomorrow...
Posted by Jon Vermilye at 9:38 PM