Today was a straight (well actually anything but straight) run down OR 22 to Bent.  Although nothing like the passes in Montana, OR 22 goes through Santiam Pass at 4817'.  I hit light snow just before the pass, and there was 3'-4' feet on the sides of the road.  The roads were clear but wet...


I have an appointment to have the tires replaced on the RAV4 tomorrow & am spending two nights at Tumalo State Park, about 5 miles north of the Toyota dealership.  Oregon's parks switch from the less expensive "Discovery" mode to "Premier," on May 1st, raising the price for a full service site from $22.00 to $26.00, still a pretty good deal. I'm in site B13, a stone's throw from the solar showers.  I wonder if the water stays hot until the morning?  I guess I'll find out - I'm a morning shower person and have never been able to adjust to taking one in the evening.

Toyota Bend ( I guess that is a better name than "Bend Toyota") said they would call me after 3:00 to let me know if the tires came in - no phone call. I guess I'll just show up for my appointment.

I grilled for the first time.  I made a couple of hamburgers, & fresh green beans but while at the store saw some good looking shish kabobs - I think I'll pick one up for tomorrow.   The Coleman combination grill/stove worked well.  After dinner I took a walk to the river that runs along side the campground. 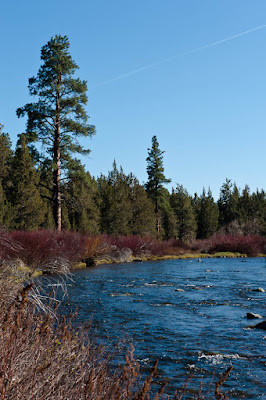 I got to Skype (on line video chat) with my daughter Karin & the grandkids this afternoon, and advantage of stopping early.  I keep forgetting that it is 3 hours later back in the east.
Today was 103.5 miles & a trip total of 4252.8.
Till Tomorrow -
Posted by Jon Vermilye at 9:51 PM