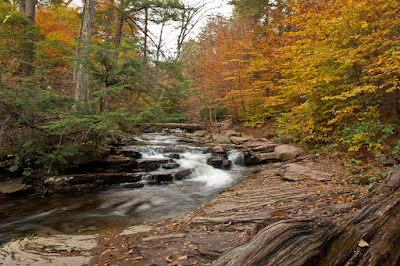 
Well, I'm in a much better mood tonight. Maybe it is because I didn't break my trailer today! I even managed to bend the steps back in shape enough to get them out. I'll still need to replace them, but at least I don't have to hop over them to get in & out of the trailer.


Although the leaf color seems to be a bit past peak at Letchworth, the colors were beautiful along the drive to Ricketts Glen.


The last part of the drive to Ricketts Glen was interesting. A bridge on PA Rt 487 was out about 15 miles from the park,and 487 is the only reasonable way into the place from the north. I stopped in a gas station in Dushore to ask how to get there since my GPS kept telling me to get me back on 487 before the missing bridge. Found a guy talking with a park ranger who gave me directions. He gave me directions to follow Dutch Mountain Road (Ct Rt 1002), mentioned it was a rough road, about 3 miles dirt, but he looked at my trailer and said it would be OK. He was right that it was rough - much of it at 20mph, even the paved parts, and my GPS still kept trying to get me off it & back on 487 before the bridge, but it saved going 50 miles out of the way to get there.

I stopped in the office at Ricketts Glen to get a site & since there were no reservations on hold, I was told to go find one I liked & come back. They are all primitive, back in sites (no water, sewer or electric) but many are very pretty. I picked site 105 because it had some sun (to recharge the batteries through the solar panel) and lots of beach trees that were still in color.


I made a quick stir fried chicken & vegetable dinner over rice & headed out to the falls. I started around 3:30 - the light was just starting to warm up. Although the beach trees are in great yellow color, the reds & oranges of the maple trees seems to have past. Looking at the leaf drop on the ground, I'm a little late for the peak here at Ricketts Glen. Color change has been running late in the Oswego area, and I'm here a week earlier than last year, but it looks like a week earlier would have been better. Still, there is some areas of great color along the stream.


I've decided that I like taking pictures of cascades rather than the waterfalls. Not sure why, but they are more interesting. I hiked down Glen Leigh to Reynolds Falls taking photos of almost every foot of the stream. It was crowded - I often had to wait for people to get out of the way of the shot. Tomorrow I'll probably go down the other side (Ganoga Glen) around the same time. Early in the day the sun will be into the lens when aimed upstream, the direction I like to shoot.


Lots more photos at today's post to Lakeshore Images, although I probably won't be able to post either this or the Lakeshore page until tomorrow since there is no cell coverage in the park.