One of the things all RV owners usually end up doing is making changes or modifications to their trailer/RV. Even after ordering the Escape 17B with just about every option available & adding a rear view camera & cell phone antenna & amplifier at the factory, I've added a few after living with the trailer for a couple of months.

First, I added a Progressive Industries 30 amp Hardwired Surge Protector (EMS-HW30C).  I wasn't all that worried about surges (though I probably should be) but aded it to detect & shut off the power to the trailer when the supply voltage dropped to under 106V.  It has a bypass remote switch, so if I'm not using the air conditioner or other device that is damaged by low voltage I can turn it off.
I didn't order a microwave with the trailer since I preferred the oversized refrigerator, and found that I didn't miss it at all.  I did miss having an oven and really like the Crusinart TOB 195 Toaster Oven I have at home.  Since I rarely used the convection feature, I ordered the TOB 155, the same oven without convection.  This is a fairly large oven ( will toast 6 slices of bread) so I will be able to make pies, cook a chicken, and just about anything I'd make at home as long as I have AC.  It draws 1450 watts, so running it off an inverter is out unless I greatly improve my batteries & solar panel.
I've added a 12V fan to the back of the refrigerator compartment - I had problems keeping it cool in desert heat and the fall helped.  I've also added a piece of furnace filter to the inside of the outside lower door of the refrigerator to help prevent the flame from blowing out when driving.
My favorite addition is a section of strip LEDs I purchased from Bulb America.  This is a 16.4' (15 meter) length of Cool White LEDs that have individual LEDs spaced about 2" apart.  It can be cut between every 3rd LED.  I ran a strip under the awning that provides an interesting night light: 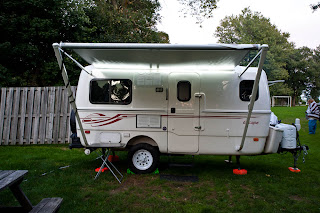 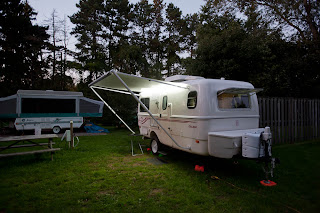 Of course, when I was done I had a fairly long strip left over.  I managed to solve another problem with the trailer - seeing inside the upper storage compartments.  Since my interior lighting is under the cabinets, they don't provide any light inside the storage bays.  Even during the day it is sometimes difficult to see in the backs of the cabinets; at night is it impossible.  My solution during the summer was to "buy" a half dozen Harbor Freight LED flashlights (they give them away with a coupon, although now they require a purchase) & I have a bunch of them. I left one in each compartment.  It worked, but sometimes I'd end up with two in one bin and none in the one I was looking in, they eventually need batteries or fail (after all they were free) so I was looking for a better solution.
I made up a bunch of cabinet length strips from the LED strip I used for the outside lighting, added a switch for each cabinet, found a power source for each and now have great lighting:
So, that is about as far as I've gone so far.  I do have plans to add a permanently wired inverter.  About all I currently use my portable 250W modified sine wave inverter for is to grind coffee beans for a morning & evening cup, but I'd like to add the ability to make coffee with my drip coffee maker when running on batteries.  Although the coffee maker draws 550 watts, it is only for a couple of minutes - I'm fairly sure I could make up the battery draw down with the current solar panel, but I'd need to add heavier wiring to the batteries and a larger inverter since its input current would be around 50 amps @ 12V.  I might even get a pure sine wave inverter so I could use my electric blanket to warm up the sheets prior to hitting the sack.  The one I'm using only draws 1 amp & I usually only run it for an hour or so before I get tired of the heat.
So, that's what is happening.  I'm still trying to decide if the Fall color change is going to be worth chasing when my local commitments are finished on the 15th.
Til then!
Posted by Jon Vermilye at 2:02 PM