The Iris Are In

Not to much happening with the trailer - I have decided my leak last weekend was due to a slightly opened window combined with driving in the rain.  We had a pretty serious storm yesterday (1.6" in an hour) and everything was dry.

Plans are still on for leaving for Nova Scotia around the 14th of June.  The only thing that could hold it up is the crew painting & carpeting 3 rooms, but they promise they will be done by then.

My iris are in their glory.  I'm surprised they are still alive - I have been away for two years worth of weeding & the bed is a mess.  I grow a couple of types - the one in the photo above & below was developed by a colleague at SUNY Oswego, William G. McGarvey.  He was a well known iris hybridizer specializing in Siberian Irises. This variety is very prolific as well as tall & majestic.


While the McGarvey are my favorites, I also have a bunch developed by Laura Brinton for who I gardened while in high school. I spent many hours working on her gardens & her estate, much of which became the Brinton Brook Sanctuary.

While not as impressive as the McGarvey variety, a field of them is beautiful:

Far less impressive, but far more practical - my blueberry bushes are also in bloom.  While everyone is having problems with a lack of bees, it looks like they are getting pollinated - hoping for a big crop later in the summer. 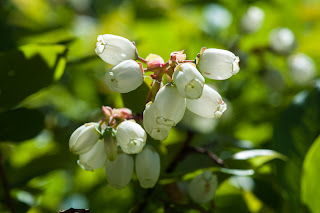