So, I'm in the driveway packing the truck & trailer for my next trip (more later) and Model T Fords started going by.  Now I live on a rarely busy county road that makes a loop along Lake Ontario, but is usually not driven unless you are visiting on the road.  The one exception is during the winter the main road NY 104 between Rochester & Oswego (part of the Seaway Trail) may close due to heavy snow or an accident & the traffic is routed along our road.

They had signs on the vehicles, but went by to quickly for me to read them.  As I was driving back from my noontime swim I saw a couple of them stopped along side the road.  I stopped and found that they are all members of The Model T Ford Club, International.  They are doing a week long tour of the area with a base in Auburn, NY.  There are around 250 of them, and they have been going by all day. 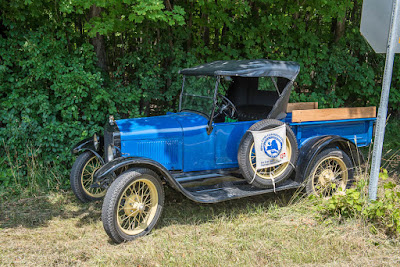 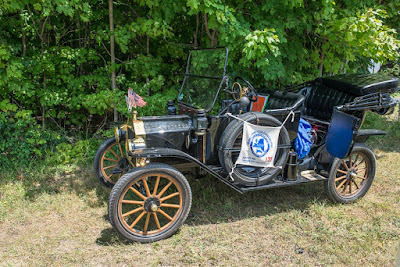 As I mentioned at the start of the post, I'm packing for a trip.  This will be the first camping trip with the new 2016 Tacoma.  I leave Friday morning, and have just about everything but the last minute items packed.  I want to weigh the works, and the transfer station is not open on Fridays, so I have to weigh it tomorrow.

The trip is a short one - I'm meeting Don & Anne (the friends I went to Alaska with last June & July) on Friday in eastern NY, then making a couple of 200 mile hops to Lamoine State Park in Maine where we will meet Don's brother & head the next day to Acadia National Park.  We will be there for a week, then spend another week exploring New England.

I have reservations for the truck to go to Nantucket on August 9th for 2 weeks visiting my brother (without the trailer; the ferry price is bad enough with just the truck!) then back to Oswego, pick up the trailer & head to "Pickin in the Pasture", a bluegrass festival in the Finger Lakes.

After that I get to relax until the end of October when I'm heading South for the winter.